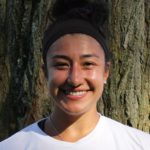 Coach DeSimone has been coaching with Metro for three years.  She attended Suffern High School where she was an All-American defender for the Mounties. While at Suffern, Coach DeSimone was a four-year starter earning All-Section, All-League, and All-County for three years, as well as Captain both her Junior and Senior years. Additionally, she was a member of the 2008 and 2009 Empire State Games, and played on the Hudson Valley team in the Women’s Division National Tournament in 2008 and 2009. Coach DeSimone went on to play lacrosse at Union College, where she was a four-year starting defender. While playing at Union, she earned All-League, and All-Region honors, as well as four-time Liberty League Defensive Player of the Week. Additionally, Coach DeSimone was named Captain both her Junior and Senior year at Union. Upon ending her career, she totaled 124 ground balls (2nd all-time) and 64 caused turnovers (3rd all-time). Following graduation Coach DeSimone accepted a job teaching English and coaching Varsity Lacrosse at the Taft School, while simultaneously enrolled in the Graduate School of Education at the University of Pennsylvania. Coach DeSimone is now a special education teacher and co-head coach of the Metro Magic 2023 team.