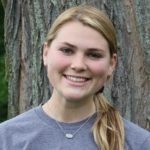 Coach Fox graduated from North Rockland high school in 2016.  In high school she received All Section, All County, and All League honors and played on the National Tournament team.  Coach Fox is going into her senior year at Dominican College. Playing midfield at Dominican, she has already garnered several honors including CACC Rookie of the year, First Team All CACC all three years and First Team All EACC.  As a junior, she has also broke the records for all time leading draw controls, assists and points at Dominican. Coach Fox majors in Education with the goal to become a Physical Education Teacher.  Coach Fox is the Head Coach of the Metro Magic 2028 team.