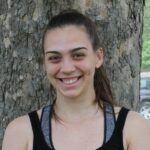 Coach Aleya Corretjer graduated from North Rockland High School in 2018. In high school, she received Rockland County Female Athlete of the Year, Journal News Player of the Year, All American, All Conference, All Section and All League.  She was selected first team all state and made NYS tournament team.  Coach Aleya is going into her senior year at Pace University, where she has continued her lacrosse career.  Thus far, she has earned Second team all region. Coach Aleya is majoring in computer science and getting her masters in cybersecurity.  Aleya is the assistant coach of the 2026 team.