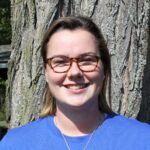 Kaitlyn Gutenberger was a 2016 North Rockland High School Graduate. In her high school career she was a 5 year Varsity starter for the Red Raiders.  She was awarded 4 years of All County and All Section  awards, and was a member of their 200 goal club. Kaitlyn was the 2016 Rockland County Journal News Player of the Year.  Kaitlyn went on to play at St. Thomas Aquinas College (STAC), where she was a stand out on both attack and midfield. She redshirted her freshman year, but then in 2018-2019 was awarded the Comeback Player of the Year and MVP honors. In 2018, and 2019 she became a Spartan 100 goal club member, 100 point club member, and draw specialist with 100 career draw controls. She also holds a captainship for the Spartans. Kaitlyn has recently graduated with a bachelors in science from St. Thomas Aquinas College. Her major was Criminal Justice with a minor in Forensic Psychology.  Coach Kaitlyn is the assistant coach of the Metro Magic 2025 team.