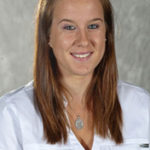 Chrissy went to North Rockland high school where she was named All America honorable mention and All State. She was also All Section, All County, All League for North Rockland, second leading all-time points leader at North Rockland with 233 (170 goals and 63 assists). While at North Rockland, Chrissy was a four-year letter winner in lacrosse and also a two-time player-of-the-year in field hockey. She played on the New York State team for lacrosse, and Futures Junior Olympics for Field Hockey. Chrissy went on to play lacrosse at Manhattan College. While there, she was MAAC Rookie of the Year in 2009 and was named to the All-MAAC First Team. She was named MAAC Rookie of the Week three times during the season. Chrissy finished her career ranked second on the program’s all-time list in both goals (164) and points (196). After graduating, Chrissy went on to assistant coach at St. Thomas Aquinas College and is currently a special education teacher.  Coach Chrissy is the co-head coach of the Metro Magic 2020 team and recruiting coordinator.