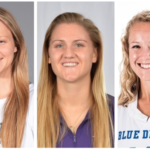 Three Metro alumnae have been named to Inside Lacrosse’s list of Preseason All-Americans!

“Overall, returning fifth-year players lead the way in what might be the greatest collection of talent ever seen in the college ranks, and in a year where the unusual is now the norm, there’s potential for a lot of movement from this initial list.”

Both Sammy Mueller and Gabby Rosenzweig are fifth-year players, in grad programs different from their alma mater.  Be sure to follow along this year to see how they impact their new teams!