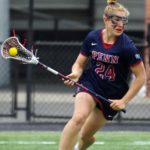 PHILADELPHIA – The University of Pennsylvania women’s lacrosse team placed a pair of players, Erin Barry and Gabby Rosenzweig, on the initial Tewaaraton Award watch list. Barry and Rosenzweig are no strangers to college lacrosse’s top individual award, having been named to the preseason watch list before.

The Tewaaraton Award is given annually to the most outstanding college lacrosse player. The 20th annual Tewaaraton Award Ceremony will be held May 28, 2020 at the Smithsonian Institution’s National Museum of the American Indian in Washington, D.C.

Barry lands on the watch list for the second consecutive season after another extraordinary campaign in which she garnered IWLCA third-team All-America, IWLCA first-team All-Region, Inside Lacrosse honorable mention All-America, Ivy League Midfielder of the Year and unanimous first-team All-Ivy honors as a junior. Barry, a midfielder with a nonstop engine and determination to control the entire field, started all 18 games for Penn as a junior, finished second on the team with 37 goals, third in points with 43 and third in ground balls with 35.

For her career, Barry ranks sixth in program history with 112 goals, 13th with 137 points and is one of just three Quakers to be named the Ivy’s Midfielder of the Year.

Rosenzweig is on the watch list for the third straight season and, in both her sophomore and junior campaigns, was named as one of the final 25 nominees for the Tewaaraton Award in April. The senior attacker is a two-time IWLCA third-team All-American, a two-time IWLCA first-team All-Region pick and two-time first-team All-Ivy selection, picked unanimously last season as a junior. Like Barry, Rosenzweig started all 18 games last year, setting the single-season scoring record with 98 points while also setting the assist record with a team-high 63. Her 98 points were the most in the Ivy League since 1983, ranking third overall, and finished seventh in the country in points and assists per game.

The senior will go down as one of, if not the best statistical player in program history. Already with 225 career points, Rosenzweig is only 12 points from owning the program’s record and, with 115 career assists, just 12 helpers away from matching that record. Rosenzweig owns the top-two single-season totals for points in a season, totaling 98 last year and 85 as a sophomore. In addition to holding the record for most assists in a season, her sophomore year ranks fourth in both goals (49) and assists (36).